The Erosion of Marriage

The Erosion of Marriage

The ‘crude marriage rate’ [the number of marriages per 1000 of the estimated population] for 2019 was at its’ lowest ever point at 4.5. The number of marriages occurring in 2019 being 113,815. Provisional data for 2020 show the effect of the situation we live in with only 37,813 marriages occurring between January and June and were registered by the end of August – the 6 month’s average for the last 5 years being 55,492. 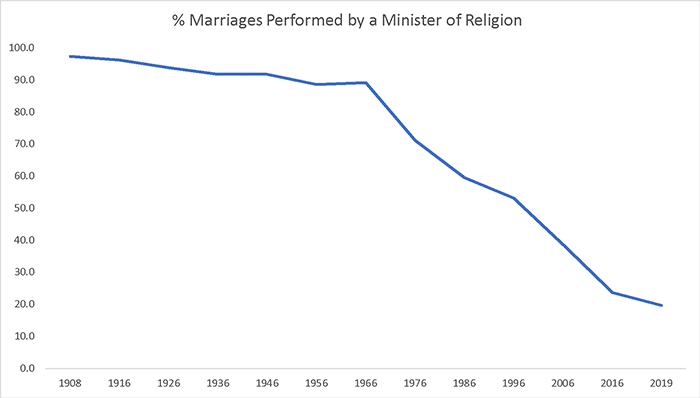 Over the decades the percentage of marriages performed by a “Minister of Religion” has fallen to just 19.7%

Evidently the reason given by some for being married by a “Civil Celebrant” is the freedom to personalise the ceremony, write one’s own vows and ditching traditions that they find meaningless or sexist.

Whilst there is little difference between de facto and marriage there has been the great rise of de facto relationships/co-habitation before marriage from around 16% in 1970 and 56% in 1992 to 81.3% in 2019 [latest available from ABS]

This landscape creates massive challenges for those of us who champion the value of marriage, God’s design of marriage that is. It would seem unlikely that a return in popularity of getting married will come through legislation or messaging/promotion but more likely will come through communities, particularly our communities – the Church model marriage and as with salvation people will say that what I need, that’s what I want help me get there!

All Scripture is inspired by God and is useful to teach us what is true and to make us realize what is wrong in our lives. It corrects us when we are wrong and teaches us to do what is right. God uses it to prepare and equip his people to do every good work.